The following review by Ian ‘Cat’ Vincent was published in Fortean Times issue 323. Click on the page images to enlarge, or read the full text below. 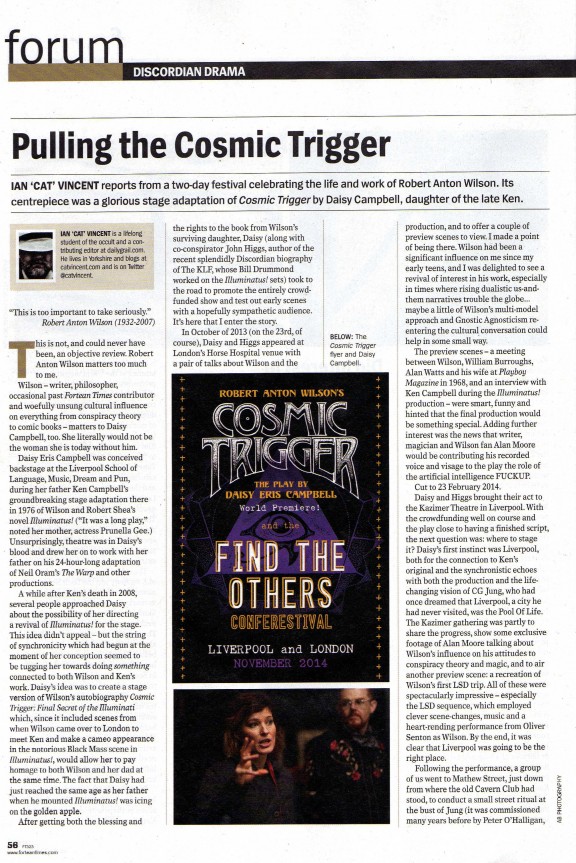 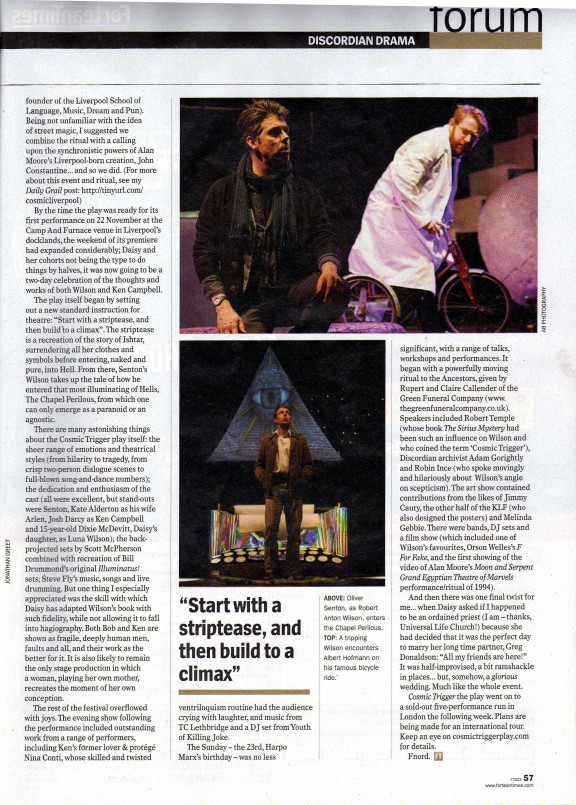 This is not, and could never have been, an objective review. Robert Anton Wilson matters too much to me.

Wilson – writer, philosopher, occasional past Fortean Times contributor and woefully unsung cultural influence on everything from conspiracy theory to comic books – matters to Daisy Campbell, too. She literally would not be the woman she is today without him.

Daisy Eris Campbell was conceived backstage at the Liverpool School of Language, Music, Dream and Pun, during her father Ken Campbell’s ground-breaking stage adaptation there in 1976 of Wilson and Robert Shea’s novel Illuminatus! (“It was a long play” noted her mother, actress Prunella Gee.) Unsurprisingly, theatre was in Daisy’s blood and drew her on to work with her father on his 24-hour-long adaptation of Neil Oram’s The Warp and other productions.

A while after Ken’s death in 2008, several people approached Daisy about the possibility of her directing a revival of Illuminatus! for the stage. This idea didn’t appeal – but the string of synchronicity which had begun at the moment of her conception seemed to be tugging her towards doing something connected to both Wilson and Ken’s work. Daisy’s idea was to create a stage version of Wilson’s autobiography, Cosmic Trigger: Final Secret of the Illuminati which, since it included scenes from when Wilson came over to London to meet Ken and make a cameo appearance in the notorious Black Mass scene in Illuminatus!, would allow her to pay homage to both Wilson and her dad alike. The fact that Daisy had just reached the same age as her father was when he mounted Illuminatus! was icing on the golden apple.

After getting both the blessing and the rights to the book from Wilson’s surviving daughter, Daisy (along with co-conspirator John Higgs, author of the recent splendidly Discordian biography of The KLF, whose Bill Drummond worked on the Illuminatus! sets) took to the road to both promote the entirely crowd-funded show and test out early scenes with a hopefully sympathetic audience. It’s here that I enter the story.

In October of 2013 (on the 23rd, of course), Daisy and Higgs appeared at London’s Horse Hospital venue with a pair of talks about both Wilson and the production, and to offer a couple of preview scenes to view – and I made a point of being there. Wilson had been a significant influence on me since my early teens, and I was delighted to see a revival of interest in his work, especially in times where rising dualistic us-and-them narratives trouble the globe… maybe a little of Wilson’s multi-model approach and Gnostic Agnosticism coming back into the cultural conversation could help, in some small way.

The preview scenes – a meeting between Wilson, William S. Burroughs, Alan Watts and his wife at Playboy Magazine in 1968, and an interview with Ken Campbell during the Illuminatus! production – were smart, funny and hinted that the final production would be something special. Adding further interest was the news that writer, magician and Wilson fan Alan Moore would be contributing his recorded voice and visage to the play in the role of the artificial intelligence FUCKUP.

Daisy and Higgs brought their act to the Kazimer Theatre in Liverpool. With the crowdfunding well on course and the play close to having a finished script, the next question was: where to mount the play? Daisy’s first instinct was Liverpool – both for the connection to Ken’s original and the synchronistic echoes with both the production and the life-changing vision of C.G. Jung, who had once dreamed that Liverpool, a city he had never before visited, was the Pool Of Life. The Kazimer gathering was partly to share the progress, show some exclusive footage on Alan Moore talking about Wilson’s influence on both his attitude to conspiracy theory and magic, and to air another preview scene – a recreation of Wilson’s first LSD trip. All of these were spectacularly impressive – especially the LSD sequence, which successfully employed clever scene-changing, music and some heart-rending acting from Oliver Senton, the actor cast as Wilson. By the end, it was clear that Liverpool was going to be the right place.

Following the performance, a group of us went to Mathew Street, just down from where the old Cavern Club had stood, to conduct a small street ritual to the bust of Jung there, which had been commissioned by Peter O’Halligan, founder of the Liverpool School of Language, Music, Dream and Pun, many years before. Being not unfamiliar with the idea of street magic, I suggested we combine the ritual with a calling upon the synchronistic powers of Alan Moore’s Liverpool-born creation, John Constantine… and so we did.

(For more about this event and ritual, see my Daily Grail post: http://tinyurl.com/cosmicliverpool)

By the time the play was ready for its first performance on November 22nd at the Camp And Furnace venue in Liverpool’s docklands, the weekend of its premiere had expanded considerably – Daisy and her cohorts not being the type to do things by halves, it was now going to be a two day celebration of the thought and works of both Wilson and Ken Campbell.

The play itself began by setting out a new standard instruction for theatre… “Start with a striptease, and then build to a climax”. The striptease is a recreation of the story of Ishtar, surrendering all her clothes and symbols before entering, naked and pure, into Hell. From there, Senton’s Wilson takes up the tale of how he entered that most illuminating of Hells, The Chapel Perilous – from which one can only emerge as a stone paranoid, or an agnostic.

There are many astonishing things about the play of Cosmic Trigger itself: the sheer range of emotion and theatrical styles (from hilarity to tragedy, from crisp two-person dialogue scenes to full-blown song-and-dance numbers); the dedication and enthusiasm of the cast (all were excellent, but stand-outs were Senton, Kate Alderton as his wife Arlen, Josh Darcy as Ken Campbell and 15 year old Dixie McDevitt, Daisy’s daughter, as Luna Wilson); the back-projected sets by Scott McPherson combined with recreation of Bill Drummond’s original Illuminatus! sets; Steve Fly’s music, songs and live drumming… but one thing I especially appreciated was the skill with which Daisy adapted Wilson’s book with great fidelity, while not allowing it to fall into hagiography – both Bob and Ken are shown as fragile, deeply human men, faults and all – and their work all the better for it.

It is also likely to remain the only stage production in which a woman, playing her own mother, recreates the moment of her own conception.

The rest of the festival was overflowing with joys. The evening show following the performance included outstanding work from a range of performers, including Ken’s former lover & protege Nina Conti, whose skilled and twisted ventriloquism routine had the audience crying with laughter, and music from T. C. Lethbridge and a DJ set from Youth of Killing Joke.

The Sunday – the 23rd, Harpo Marx’s birthday – was no less significant, with a range of talks, workshops and performances. It began with a powerfully moving ritual to the Ancestors, given by Rupert and Claire Callender of the Green Funeral Company. Speakers included Robert Temple (whose book ‘The Sirius Mystery’ had been such an influence on Wilson and who coined the term Cosmic Trigger), Discordian archivist Adam Gorightly and Robin Ince (who spoke movingly and hilariously of his love of Wilson’s angle on skepticism). The art show contained contributions from the likes of Jimmy Cauty, the other half of the KLF (who also designed the posters) and Melinda Gebbie. There were also bands, DJ sets and a film show (which included one of Wilson’s favourites, Orson Welles’ ‘F For Fake’ and the first showing of the video of Alan Moore’s ‘Moon and Serpent Grand Egyptian Theatre of Marvels’ performance/ritual of 1994).

And then there was one last twist for me… when Daisy asked if I happened to be an ordained priest (I am – thanks, Universal Life Church!) because she had decided that it was the perfect day to marry her long time partner, Greg Donaldson – “all my friends are here!”. It was half-improvised, a bit ramshackle in places… but, somehow, a glorious wedding. Much like the whole event.

‘Cosmic Trigger’ the play went on to a sold-out 5 performance run in London the following week. Plans are being made for an international tour. Keep an eye on cosmictriggerplay.com for details.