Dominic Search Articles 23 November, 2015 Comments Off on Nothing Really Matters

A talk by Dominic Search given at our Gathering of The Cosmic Fools event on 23rd November 2015.

The Magickal Significance of Zero

“By definition, everything must contain nothing,
and nothing everything: meanwhile,
we argue the worth of deities.”
— Penny Rimbaud

I’m going to give a talk about why nothing really matters. If I lose some of you in the esoteric detail, then fear not – this is normal. Information vital to your future will none the less be lodged in your brain, and someday you will have a wonderful epiphany.

Well we can but hope…

The Zero of Math and Magick

OK, so we all know what zero is right?
It means nothing – No Thing.

We are taught about it in school with other basic maths. We learn that zero divided by any number is always zero; that any number divided by itself is one; and that dividing any number by zero is a kind of infinity:

So what about zero divided by zero?

The first rule says it is zero, the second says it is one, and the third says its infinity. Officially mathematicians say it is “undefined”.

However it does shed light on why, in magick, zero represents infinite potential. The Great Mystery is how nothing becomes something, and to obtain union with nothing is The Great Work of the magus.

From NoThing to SomeThing

It is the job of creation myths to explain that Great Mystery – how an infinite universe came into being from nothing. One of the earliest such myths to have survived in a complete form is from Egypt four and a half thousand years ago.

It says that in the beginning there was the condition of nothing, called Nun. This nothing was infused with Atum – the creative potential for everything, and Nehebka – the energy for its manifestation.

Gradually Atum defines itself as something separate and in doing so caused an outpouring of creativity. Atum is androgynous, so masturbates two children into being. They were Shu & Tefnut.

Through sexual union, Shu & Tefnut birth the Earth god Geb, and the sky goddess Nuit. At first they are a single being, an undivided unity as lovers in an eternal embrace. 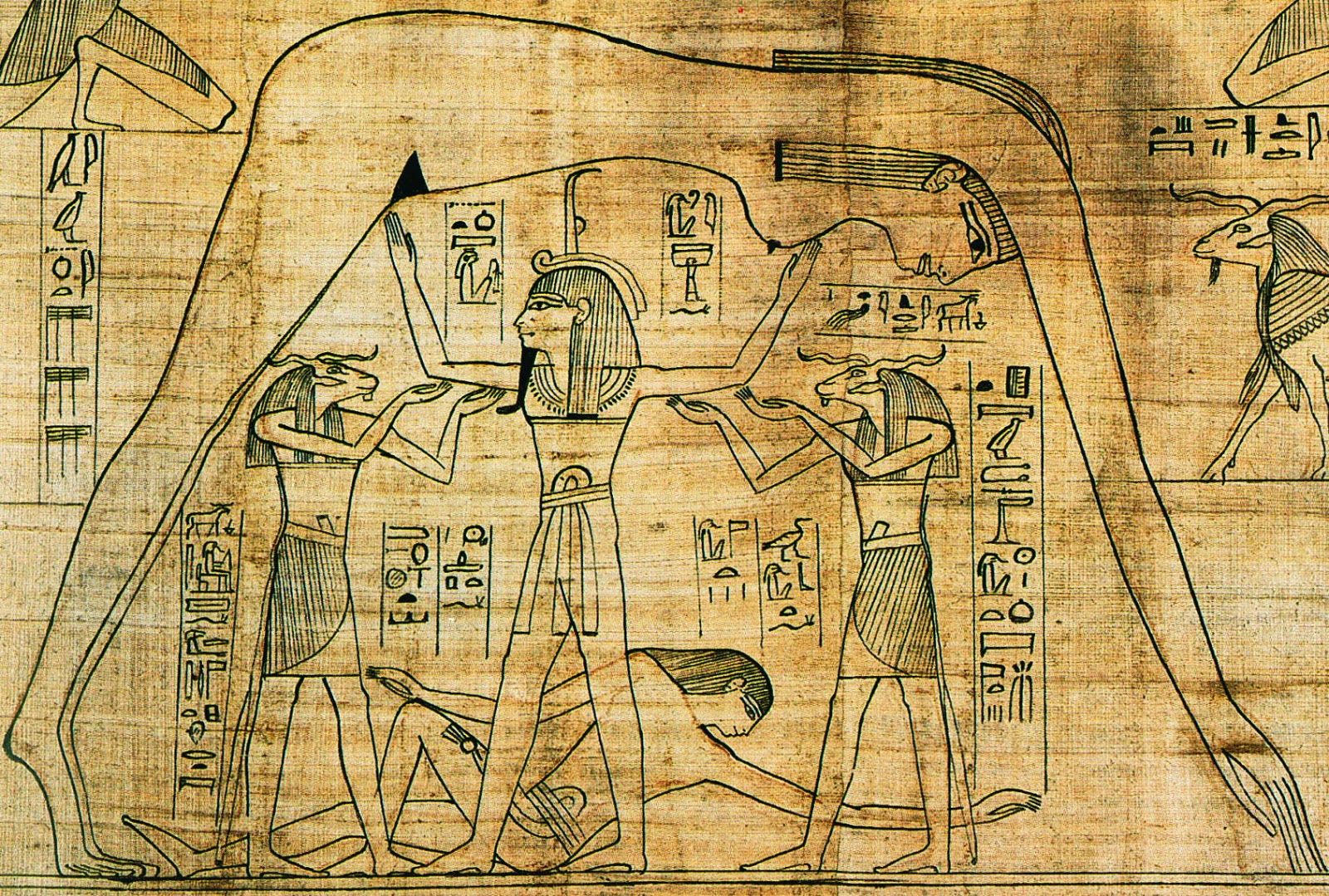 But duality is needed for the rest of existence to manifest, so Shu, the god of the atmosphere, intervenes by separating the lovers. Geb falls from Nuit’s embrace and Shu stands in-between, forever holding them apart.

This makes space for the spiritual to take full material form. Geb & Nuit are then able to birth Isis, Osiris, Seth & Nephthys.

With the manifestation of these 9 primary deities from the nothing the creative cycle is complete. Horus, the 10th god, is the reflection in microcosm of Atum, the first god, and starts the cycle again.

The Kabbalahic Zero of Tarot

Egyptian myths & deities are a key foundation of modern Western magick; and the Tarot is said to have originated there. 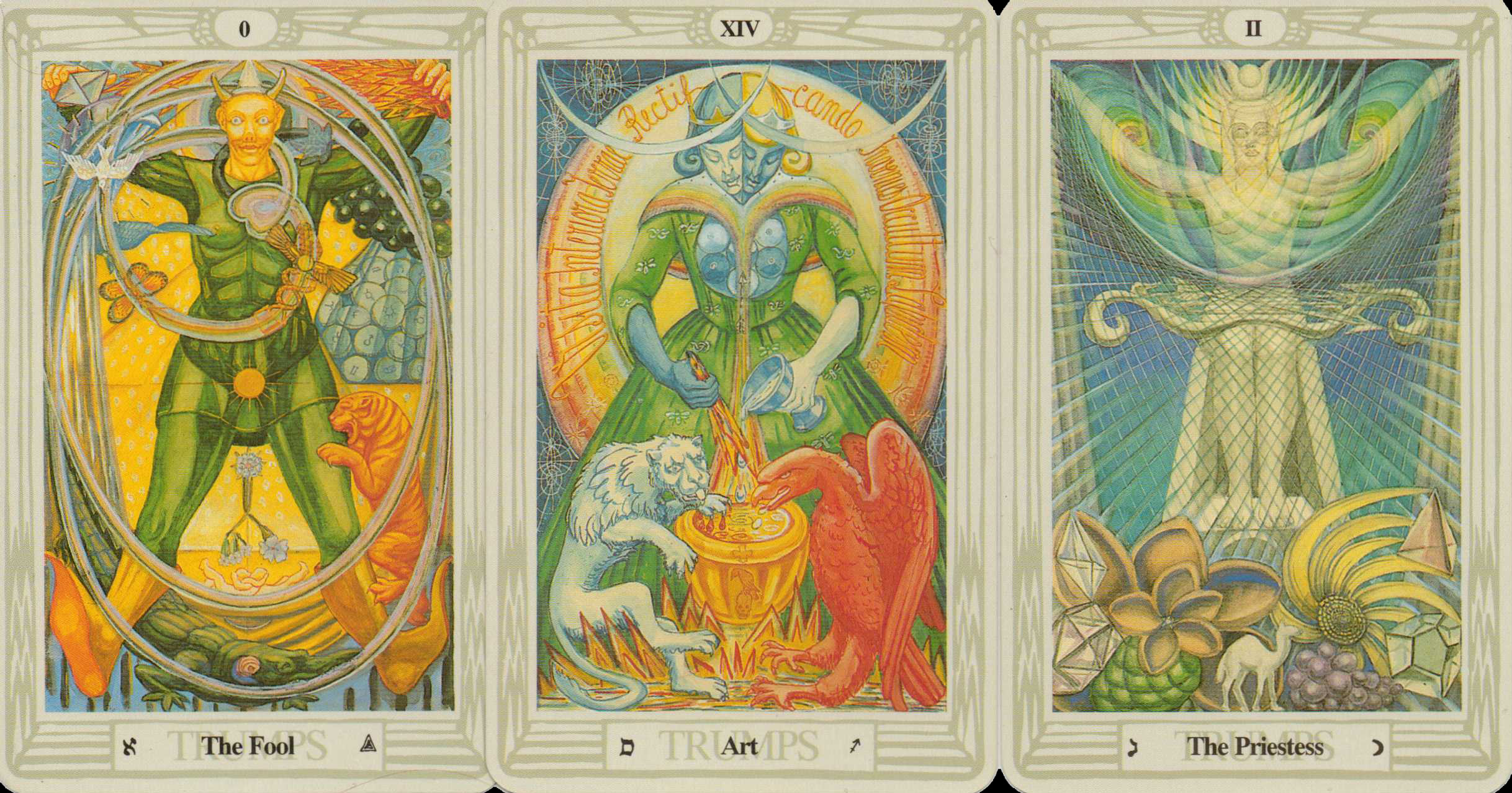 In the 1940’s, English occultist Aleister Crowley created the Egyptian inspired Thoth tarot deck. He used the Judaic Kabbalah to map the correspondences between tarot and many other mystic systems and god forms. It’s worth taking a peek at this map to see what it has to say about Zero. 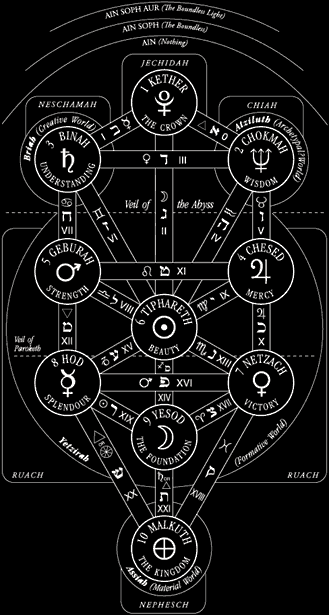 The ten main spheres, or Sephirot, of the Kabbalah represent progressive stages of creative energy becoming manifest, analogous to stages of creation described in the Egyptian myth.

They correspond to the minor tarot cards, astrological planet, chakra points, varies deities, and so forth.

The 22 paths represent the possible connections or relationships between the Sephirot. They correspond to the 22 tarot trump cards.

Above the Sephirot are 3 Veils of Negative Existence; or veils of Zero.

Creative energy only exists when it condenses through the veils in to the first Sephirot, called Kether. This represents the first indefinable possibility of Some Thing. To become more defined it must descend the Sephirot. 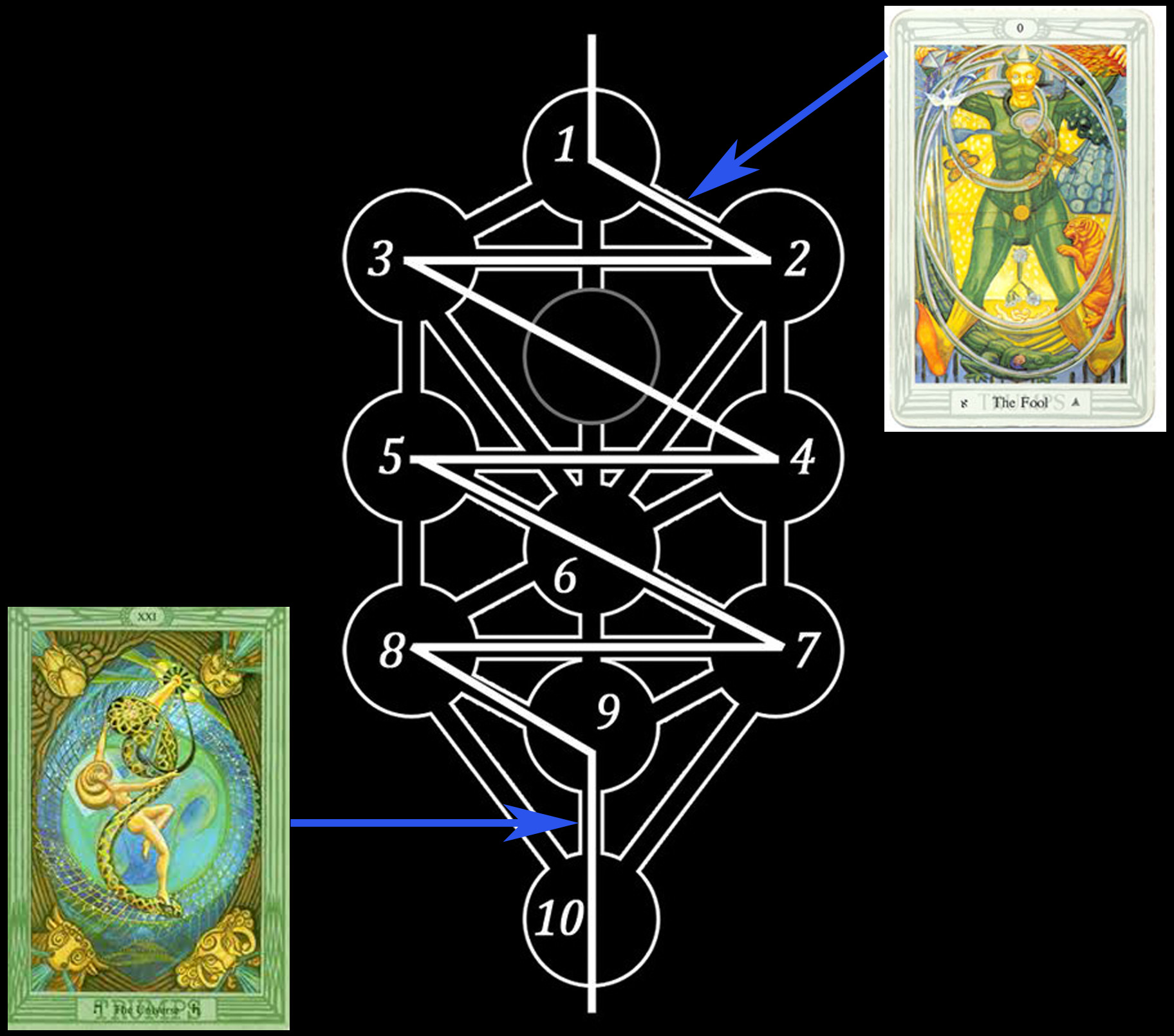 The path connecting Kether to the second Sephirot is associated with tarot Trump Zero. So it is the wandering Fool who begins that decent. The journey ends via Trump 21, The Universe (or World in some decks), at the bottom in the tenth Sephirot where the potential of Kether is now fully materialised.

And as with Horus in the Egyptian myth, that tenth Sephirot is a microcosm of the whole – It is both the end and the beginning of a journey. Once we have reached fulfilment, the cycle starts again. 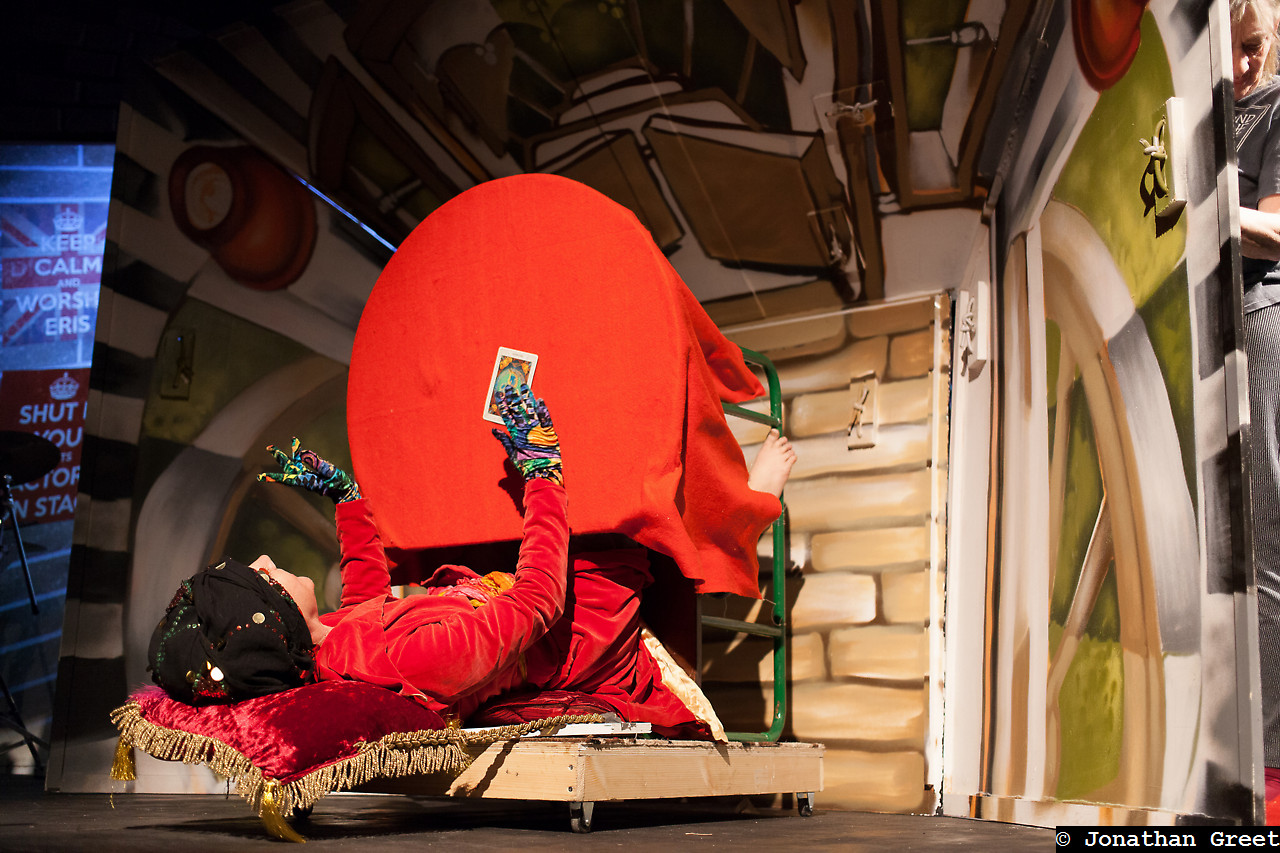 In The Illuminatus! Trilogy, Ms Portinari tells us that the order of the tarot cards was deliberately reversed. We staged this scene in Cosmic Trigger and played the sound track earlier this evening.

She is right in that as manifest beings in the material world, our starting point is the tenth Sephirot at the bottom – “the Abyss of Hallucinations where our attention is usually focused” as Ms Portinari puts it.

In other words our magickal journey starts via Trump 21, as we ascend and ends via Trump Zero, The Fool, as we try to grasp the veils of Zero at the top of the Kabbalah.

Therefore, the goal of all magickal work is to undo the illusion of reality so that we may be reunited with our Higher Self or Holy Guardian Angel.

Zero and the Harpo Horus

According to Crowley, these veils of Zero are associated with the Greek god Harpocrates, mistakenly known as the god of Silence. 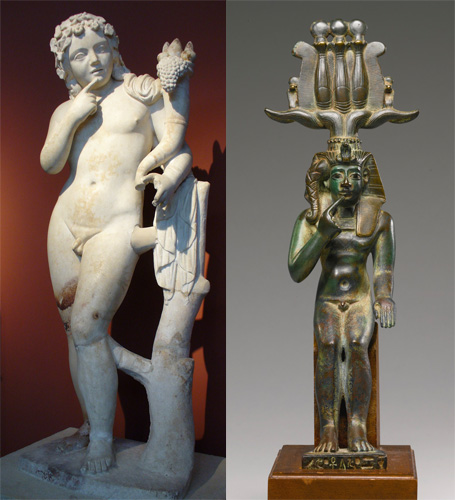 Actually he is the Greek version of the Egyptian “Har-pa-khered” meaning “Horus the Child”. He is said to represent the higher self or Holy Guardian Angel – the goal of all magickal work, which is Zero, or No-Thing.

Amongst Discordians, Harpo Marx is considered to be an avatar of Harpocrates. And by a remarkable no coincidence, today is a Harpo’s birthday – Happy Discordian Holy Day everyone!

So, from maths to Egypt and the creation of the universe, to tarot and the Kabbalah; I hope you now have an insight into why Nothing Really Matters.